A video ad experience for BuzzFeed.com

Our advertisers needed to drive more views to their video ads. However, we did not want to simply increase the number of video ads on the site at a time when we were focused on increasing consumption of our native video content.

As part of the AdTech team, we recognized that there is an opportunity to meet both business and editorial needs. I helped develop a new ad product that allows advertisers to serve ads in front of a collection of editorial videos.

To really communicate that this video unit largely serves native video content, it had to rely on existing patterns for familiarity — I looked into existing units on BuzzFeed.com that recommend content

Unlike simpler, image-only ads, this hybrid unit had 3 key states to account for

Legal requirements such as indictating what's an ad and who the advertiser were also important to consider here. However, the video ad only plays first for a few seconds and then goes away. After that, the unit only recommends native content.

With a clear understanding of how the unit would behave, I started to explore visual design. I also needed to address concerns around elements that evoked an 'ad-like' feeling.

Some thoughts I kept in mind:

The unit's design was close to completion. After sharing more widely with the team stakeholders, engineers and other designers, we had the following thoughts:

By taking feedback into account and with some visual refinement, the team and I collectively arrived at this solution. 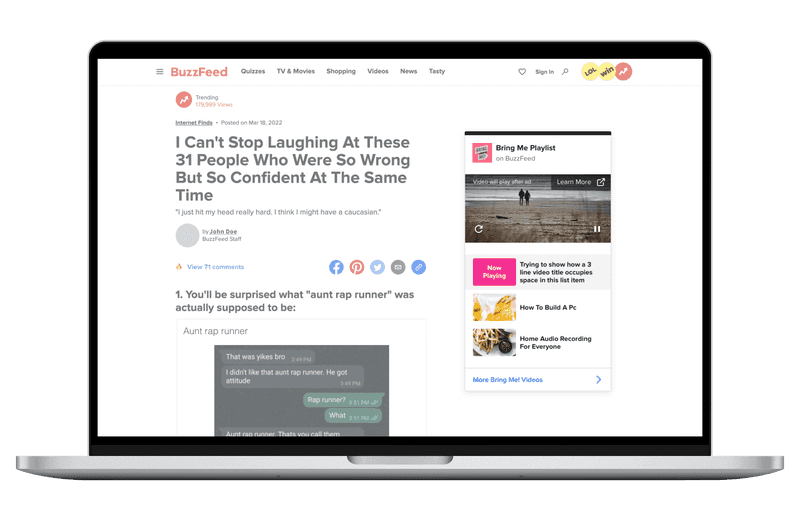 We felt this was best suited to meet our goals because

Given the high completion rate, significant revenue and no negative impact on usability metrics, the playlist ad unit became a mainstay on BuzzFeed.com.